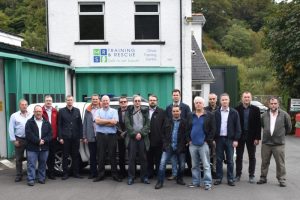 INDIRES partners got together for the first time for the project kick-off meeting which was held in the former coal mining area of the Rhondda Valley in South Wales, UK. On Tuesday 19th September 2017, representatives of the consortium each gave presentations, introducing their organisation and outlining the research work they will carry out during the three years of the project.

On 20th September we had a visit to the Mines Rescue Station at Dinas, which is operated by MRS Training & Rescue. Operations Manager Mark Tibbott gave a presentation covering the history of mines rescue in the UK generally, and South Wales in particular. Following this, Mark led a tour of the rescue station’s facilities, that are used both for operational purposes and for rescue-related training. We are grateful to Mark and MRS Training & Rescue for providing this valuable insight into an area that is central to the INDIRES project.

Finally, we had a fascinating visit to the Rhondda Heritage Park which is a coal mining museum based around the former Lewis Merthyr Colliery which operated from 1850 to 1983. Our guide, Graham, described the dreadful working condition in the mine’s early days and spelled out the scale of mining disasters in South Wales. 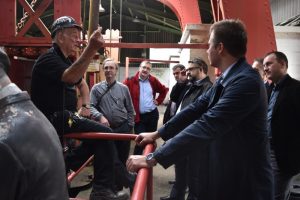 The explosion at the Senghenydd Colliery in which 439 miners were killed is well known. Perhaps a more chilling statistic is that, in the late 19th century, a miner was killed every six hours. While the mining industry can take comfort from the fact that such disasters are a thing of the past, there is no place for complacency and we hope and expect that the INDIRES project will further reduce the adverse impact of mining on the lives of those who work underground.