Two resilient communication technologies will be researched: through-rock radio employing a mesh architecture, and wire-guided radio that capitalises on the strengths of monofilar and bifilar mode communication.

An investigation will be carried out into through-rock radio at LF (Low Frequency) or VLF (Very Low Frequency). LF/VLF through-rock radio is an established technique which is used by mine operators in some geographical areas but the signal is subject to a skin-depth attenuation which can vastly exceed the normal inverse square law attenuation. It should be noted, for completeness, that with short-range near-field operation, the magnetic field falls off with distance in an inverse cube law, which leads to a sixth-power law for range. However, except at very close distances, the inverse sixth power law is still not as significant as the skin depth attenuation. The high degree of attenuation with distance means that, to achieve a practical range, these systems can be very expensive, requiring huge surface antennas and very high powers. They also tend to operate only from the surface to underground or, where two-way communication is possible, the underground equipment is too large to be considered truly portable.

However, compact and portable equipment would be suitable, in many instances, to provide communication through rock over modest distances, such as through a fall of rock, when more conventional radio techniques would be inoperative. In addition, and crucially, such small LF/VLF radios could achieve longer range communication – for example from the area affected by an incident, or from a safe haven to the shaft bottom – by employing meshing. In such a mesh network, LF/VLF radios are placed at regular intervals within the mine and communication is achieved by each station forwarding data to the next station. With such an arrangement, the power requirement increases only by the number of nodes transmitting instead of a much larger factor for a single link. Moreover, if the mesh nodes are fixed in place, the system can benefit from frequency optimisation, which could reduce the required density of the mesh, by operating it in the transition zone instead of the near-field.

The following diagram illustrates the situation. This is for a 100kHz transmission between co-planar loops in rock of conductivity 10mS/m. In this situation the skin depth is about 16m. At distances below about a third of a skin depth the signal falls off with an inverse cube law, leading to the transmitter power dissipation being proportional to the sixth power of the required range. However, at distances greater than a skin depth, this condition is swamped by the skin-depth attenuation, of 8.7dB per skin depth. There is an optimum transmission distance (for co-planar loops) of about four skin depths beyond which the signal attenuation follows the skin-depth term, super imposed on a ‘standard’ inverse square law of power attenuation. However, the skin-depth term is significantly more predominant than the inverse-square law term. In simple figures, if at 64m (four skin depths) we need a power of 1W, then doubling the range to 128m requires 12,500 times more power, i.e. 12.5kW. Given those figures, it is certain that a mesh network offers a highly significant benefit over a long-distance through-rock system. Not only does it vastly reduce the power requirement, but it increases the available bandwidth of the system. 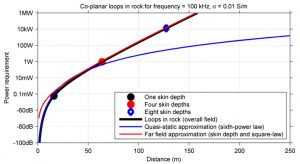 In addition to providing person-to-person communication, a highly resilient low bandwidth LF/VLF mesh will be able to provide key data, such as temperature, gas composition, visibility and signs of human life. As such it will be employed in the resilient, survivable sensors and the small, unmanned, exploratory vehicles that will be developed in this project. 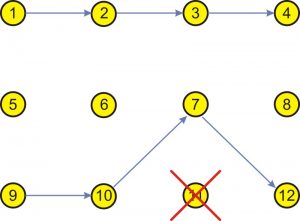 An LF mesh network will allow through-rock communication without the power limitation that LF through-the-earth links normally impose. Communication from Node 1 to Node 4 requires a total power only three times greater than from Node 1 to Node 2 which is a huge improvement compared to a single ‘hop’. A mesh configuration also provides resilience. If Node 11 is damaged, for example, instead of Node 9 -> 10 -> 11 -> 12, the path Node 9 -> 10 -> 7 -> 12 can be established.

Although an LF/VLF mesh network offers an ideal solution because it operates without wires, it must be recognised that it will rarely be economically viable to ‘flood’ a mine with mesh nodes so not all areas will be covered. Research will, therefore, be conducted into a novel method by which hand-held radios can be used in mine galleries over considerable distances, around bends and in the presence of partial collapses caused by a serious incident. The technique uses a wire to guide a radio signal along the galleries but it differs from the M-COMM rescue communication system developed in the RFCS RAINOW project, in which either the handset had to be clipped loosely onto the wire, or else a relay station had to be placed in close proximity to the wire thereby allowing the handset to communicate via Bluetooth. When used by rescue personnel, removing this restriction will allow communication to be more immediate and less distracting from other tasks. Potentially it could also be used for communication with flying drones which, by definition, cannot be tethered to a wired communication line, although LF/VLF mesh technology will be used for this purpose in this project.

The new technique is similar to that of leaky feeder communications that is often used as part of the fixed communication infrastructure in mine and transport tunnels. However, while a leaky feeder is a bulky coaxial cable that would not be suitable for rapid and temporary installation by rescue personnel, the system envisaged here would use a much smaller diameter, lighter and cheaper line that can be laid quickly and easily. The technique is to build on the methods of monofilar and bifilar radio communication that preceded the development of leaky feeder systems, and research into which was largely curtailed once leaky feeder technology was established. Monofilar systems, which can use a thin single or dual conductor cable, allow good coupling to a radio anywhere within a tunnel’s cross section but suffer high levels of longitudinal attenuation due to leakage to the tunnel wall. Bifilar systems, on the other hand, which require a thin two-conductor cable, do not couple as well to radio handsets that are not in close proximity, but have a lower level of longitudinal attenuation. Research will be conducted into a hybrid system that capitalises on the strengths of monofilar and bifilar mode systems by employing periodic or continuous conversions between the monofilar and bifilar modes along the length of the cable.