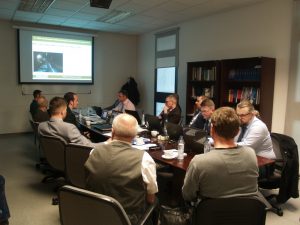 Organisations involved in the INDIRES project got together in Spain last week, hosted by project partner University Carlos III Madrid, for our fourth six-monthly progress meeting. We are now just over half way through the project and have recently submitted our first official report. Although that report documents the very significant amount of work that has been carried out to date, there is still a lot more to do as we approach the final year of the project during which several of the developments will be tested in working coal mines. Each project partner described the work they’ve been involved in since we last met six months ago, and also said something of their plans for the immediate future. Following the main meeting, and emphasising the collaborative nature of much of the work, several partners had a separate technical meeting. 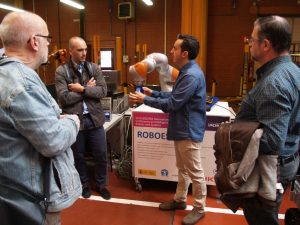 After the formal part of the meeting on the Tuesday, we were given a tour of the Robotic Lab at the University Carlos III Madrid on the Wednesday. First of all, we saw one of the robots that’s being developed in INDIRES, for investigating parts of a mine affected by an accident, to help rescue controllers to decide whether it’s safe to send human rescue personnel into the area. We were then shown a wide range of robots being developed for other projects. Included here were industrial robots, a robot that is able to bore through the ground, and several robots that have been developed for medical therapeutic purposes.  We were quite amused by a small, fury, talking robot which is able to engage with children, with an initial application in the paediatric department of an oncological hospital.