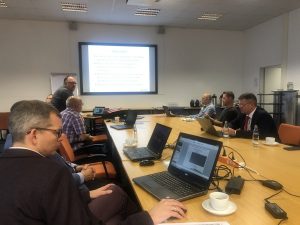 A couple of weeks ago, the INDIRES consortium met in Essen, Germany, for our fifth official partners’ meeting. Hosted by project partner DMT GmbH & Co. KG, the formal part of the meeting, held on Tuesday 8th October, involved a representative of each organisation delivering a report on their progress and achievements. In particular, each partner outlined the progress they’ve made since we last got together in April, presented their major achievements, and discussed the planned work for the next six months of the project. In addition, the University of Exeter, as project coordinator, hosted a discussion of various organisational issue concerned with the timely and successful completion of the project. Particular attention was given to the important issue of field trials, which will take place in the closing stages of the project, and which will involve testing equipment developed in the project in real coal mines in Poland and Slovenia. 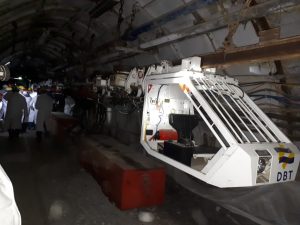 The second day of the meeting involved a visit to the training mine at Recklinghausen. This facility has galleries that are typical in size to those in working mines and is fitted with real mine machinery, but there is no possibility of explosive methane being present, which means that there are no restrictions on equipment that can be used in the mine. Because some of the equipment being developed in INDIRES will not progress, during the project, to being certified for use in explosive atmospheres, this is of potential use for testing equipment developed in INDIRES. With this in mind, therefore, following the visit, a short follow-up meeting was held to discuss testing opportunities.