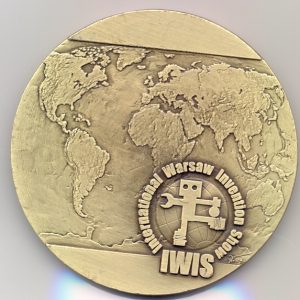 IWIS – the International Warsaw Invention Show – is the largest international event related to innovation and inventiveness in Poland and one of the biggest in Europe. In recent years, IWIS has attracted representatives from many counties in Asia, Africa, America and Europe, with delegates attending from Saudi Arabia, Croatia, Egypt, Iran, Canada, Malaysia, Korea and the United Kingdom, in addition to more local countries.

Recently, Polish and international inventors have presented more than 400 inventions at each year’s event. We are pleased to announce that, at IWIS 2019, which was held in October 2019, INDIRES project partner GIG received a bronze medal for the composite prop that they’ve developed in the project. The prop is much lighter than conventional roof supports, and will be used by rescue teams to secure the roof during rescue operations, or to stabilise emergency tunnels that have to be bored to provide access to areas of the mine cut off by falls of rock.