Although sensor development has been a theme of several RFCS projects and a wide range of commercial products are available for the mining industry, the state-of-the-art does not adequately fulfil the aims of this project. There are two main areas where this project will advance current technology with the aim of assisting information driven incident response. These are the development of resilient survivable sensors, and the adaptation, interfacing and miniaturisation of senors for use on the small unmanned exploratory vehicles. 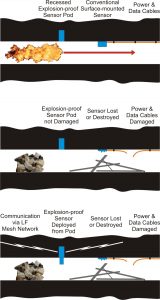 A method will be developed to allow a sensor to continue to operate following extreme conditions such a shock wave progressing down a gallery because of an explosion. The technique involves housing the sensor in an explosion-proof pod which is recessed into the roof of the gallery. Methods of deployment will also be studied, including automatic deployment following the incident and remote manual deployment. Means of communication with the sensors – primarily for obtaining environmental data from them but also, in the case of remote manual deployment, for activating the sensors – will also be researched. An LF/VLF mesh network, as developed in this project, will be used for this purpose.

Shown in the diagram…

Top: An explosion-proof sensor and an ordinary sensor, immediately before an incident.

Middle: Following the incident, only the explosion-proof sensor survives.

Bottom: The explosion-proof sensor can then be deployed and will communicate via an LF mesh network.

Sensor Adaptation for use on Small Unmanned Vehicles

Environmental sensors, including a thermal imaging camera, will be adapted so they can be carried onboard the very small unmanned exploratory vehicles that will be developed in this project. These vehicles will have a very small payload and possibly low-bandwidth communication, because of the overriding priority to design the vehicles for easy and quick deployment, might manoeuvrability and long battery life.

Adaptation will involve designing an interface that allows data transmission or on-board storage to be selected according to the time-varying communications channel properties, and the relative priority of the particular data stream. It is also an essential characteristic of the sensor set and interface electronics that the size and weight are kept to an absolute minimum. With this in mind, normal ATEX design techniques are not fully appropriate. Accordingly, it is anticipated that some of the more dispensable sub-systems on the small unmanned exploratory vehicles will not be designed for ATEX compliance. Instead, those sub-systems that are deemed to have the lowest priority will be powered down automatically, via the sensor module, when an explosive atmosphere is detected and powered up again when the environmental conditions improve.